Mike Birbiglia and Martin Moran sit down with David Gordon of TheaterMania.

Our 2018/19 season begins with Martin Moran’s OBIE Award-winning solo masterpiece (Two Drama Desk nominations, including Best Play), directed by Seth Barrish. The Tricky Part is one of the most heralded one-man plays in recent memory, and has been produced and performed all over the world—throughout the United States, Canada, South Africa and India.  Here’s a rare opportunity for those who missed it the first time to experience this extraordinary, often funny, and always surprising journey through the complexities of Catholicism, desire and human trespass.

“A translucent memoir of a play…shattering.”
– Ben Brantley, The New York Times

“Deeply personal and exceedingly honest. It steadily builds from its unassuming beginning to an emotionally charged ending. A powerful, truthful account.”  – Broadway.com

“An emotionally honest play about sexuality and reconciliation.” – Associated Press

“The Tricky Part is the most powerful play of the season.”
– Next Magazine

Martin Moran is an award winning writer and solo performer of shows as entertaining as they are soulful. His most recent offering, ALL THE RAGE, won the 2013 Lucille Lortel Award for Outstanding Solo Show and garnered an Outer Critics Circle nomination. His previous work, THE TRICKY PART, won an OBIE Award and two Drama Desk nominations, including one for Best Play. His memoir of the same title (published by Random House, Anchor Books), won numerous honors including a Barnes and Noble Discover Prize and a Lambda Literary Award. He continues to write and to perform his astonishingly moving and humorous work both nationally and internationally.

Day Piercy wrote on December 17, 2018:
A moving, generous personal sharing . I’m awed by the sensitivity and depth that reverberates within days after the show . I hope there will be a sequel to explore grace - I’m wondering if child and adult self see, feel and know the experience in similar ways.
Mike wrote on December 17, 2018:
I was so moved. As a mental health professional, this story is one I have heard far too many times. But Martin left me with something new with his story...I mostly hear the experiences of victims from their point of view, and few if any of the people I help have actually confronted their abusers. Martin so adeptly conveys in "The Tricky Part" the inability of his abuser to understand how his actions completely changed the course of Martin's life...this inability left me profoundly sad and with the impression that the abuser's deficit demonstrates a black hole in a soulless human being. My hope is that Martin's loss can get better, but it will always remain...
mike strohlwrote on December 9, 2018:
Moved me to tears. His story was (is) my story.
Helaine C wrote on December 9, 2018:
I was so moved I could not leave my seat at the end of the play. I had to catch my breath. I was over whelmed by the message of grace. 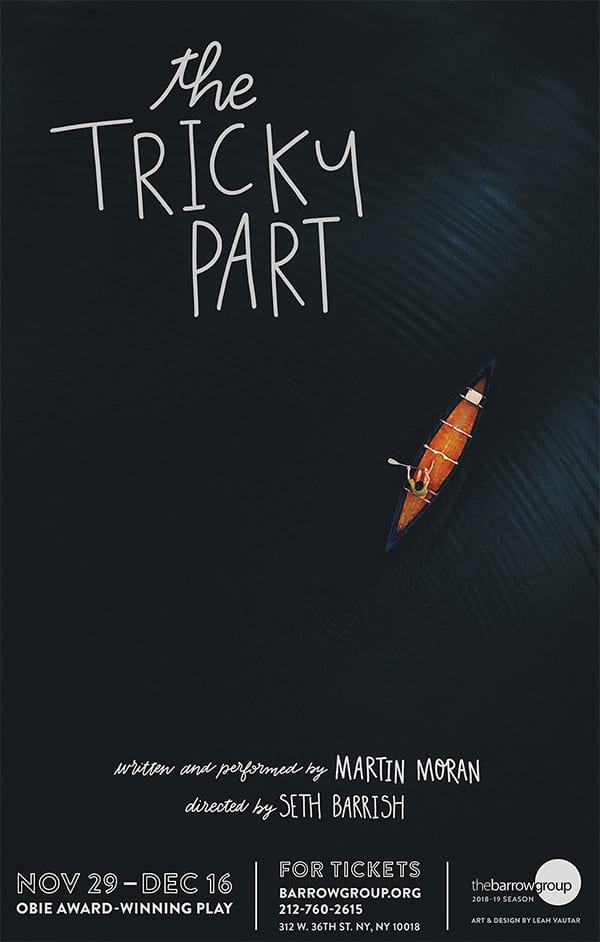 How To Put Your Name on the Waitlist

If the performance you'd like to see is sold out, there's still a chance!
We open our waitlist for each performance an hour before show time. You must be physically present an hour before showtime to add your name and may not add names of others. To add your name, check in with our House Manager in the lobby of the theatre on the 3rd Floor of 312 W. 36th, New York, NY 10018.

If there have been tickets returned or tickets that have not been claimed at showtime, we will seat people off the waitlist in the order they signed up. There are no guarantees you will be seated, but we will make every effort to get you in.