What Can You Get from Attending Acting Classes in NYC?

The City that Never Sleep can offer you acting classes and acting opportunities you will find nowhere else in the world. There is only one Broadway, and it’s in New York City! Films are also made there, so there’s screen work to be found as well. 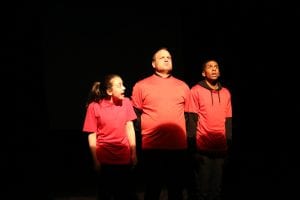 The Barrow School offers acting classes of a flavor no one else can imitate. We focus on straight, screen, improv, and musical theater acting with renowned instructors, all professionals in their own right. You will learn how to work in the New York market, becoming a commodity in your own right. Each type of acting class is offered in great detail, preparing you to walk into the Equity building or other audition venue and give it your all so that you can get cast. We prepare you completely for that moment. There will usually be nothing in the audition process that will surprise you after our preparation. You’ll have the perfect audition material: song, monologue and background in cold reading. All this groundwork will “wow” the auditioners and allow you to shine and prove that you are good enough to work on Broadway or in film.

A Leg Up on Others

While many actors come to New York City with the hopes of making it on Broadway, the number who succeed are very few. Unfortunately for some, they don’t hone their craft and believe that their high school drama department prepared them for what they faced in skill and knowledge. Regrettably, that’s just not true. The theaters in NYC require a higher caliber of talent than just rough ability; they want their gemstones shiny and perfect, not just delivered as it was found, dirty and rough. Training at the Barrow Group will allow you to become that fine diamond, shiny and perfect, a treat to the auditoners who are looking for someone honed, not someone untrained. Our acting classes offer you the finest background to achieve this. Training with professional actors, who know what you need to be in order to succeed, will bring you to the forefront of other actors without similar training.

You will find that acting classes are pertinent to your success as an actress or actor, especially in New York City. There are many schools from which to choose and making the choice can be overwhelming. Talk to other performers who impressed you with their talent and uniqueness and ask where they trained. Quite often, you’ll be told that their schooling was obtained at The Barrow Group in New York City. The famous Academy award-winning actress Anne Hathaway attend this place of learning, and stated how useful her training was, especially using the “less is more” method.

Less is more is a doctrine that eschews the histrionics and overacting of some methods of acting. It’s the belief that a simple turn of the head, fighting back tears (even if they come) and a single step forward speaks far louder than shaking a fist or breaking down in hysterics. There is a time for that, but that should be the seasoning, not the meat, of your performance. One actress, auditioning for Mary Chapin-Carpenter’s Passionate Kisses video, was asked to portray how she would react to her boyfriend or husband cheating on her. She gamely launched into a loud, explicative-filled and out-of-control diatribe. The producers and directors were hugely taken aback. They murmured about the noise and the fact that they were using space in a church for the auditions. She ended up being cast in small vignettes, only because the director liked the actress’ look. If that had not been the case, she would have lost the opportunity to appear in a professional music video. A subtler expression of her ire would have drawn in the auditioners, not pushed them away. Remember this story as you’re performing your next role or honing your audition monologue.

The Barrow Group will teach you less is more, and so many other acting methods that you’ll be unstoppable as a performer.