What are the Theatre Conferences?

The New England Theatre Conference (NETC)* and Southeastern Theatre Conference (SETC) have auditions (as well as several auditions in NYC) which are viewed by theaters and casting agents from all over the country. The SETCs have a cattle call (mass audition) twice a year and the NETCs once a year, so that these attending theaters can see the talent available for them for their summerstock and regional theater needs. In last year’s audition, theatres represented were repertory and stock companies, single show venues, cruise lines, dinner theatres, entertainment agencies, etc. Ultimately, this is your chance to audition for a theater’s season en masse at one go.

But how do you stand out among hundreds (the SETCs has had over 800 actors/singers/dancers audition spots), with only 60 seconds of a monologue, 60 seconds of a song, OR 90 seconds of a song and a monologue? The Barrow Group, a New York City acting school, can help you. Unlike most auditions in NYC, you will have to audition to audition. For the SETCs, you need to fill out an application, and there are other requirements if you are going as a professional actor rather than a student. SETC Singer-Actor Application. The NETCs will accept you if you meet their criteria and are not Equity. They allow a two-minute audition time. NETC Audition Instructions.

Make no mistake, these Theater Conferences are handled just as professionally as auditions in NYC. You should take your preparation seriously. Many theater companies and others who cast talent will be there, so you have your brief time to shine for them all. Even if they don’t have something this season for you, they may be impressed enough to hold onto your headshot/resume for a future endeavor. You should prepare for this audition months in advance. You need for your material to be second nature to you, including gestures and movements. This should be as polished as any monologue or song you do for NYC casting.

Selecting Your Monologue and Song 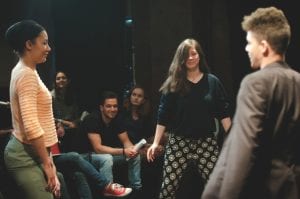 This is the trickiest part of the audition. You want to present yourself as easy-to-work-with, affable, smart, mature and someone who will be a productive part of the season for which you are auditioning.

First of all, and most important, avoid finding material from compilations of monologues and songs, such as Hal Leonard’s The Singer’s Musical Theatre Anthology in different voice parts. These books are great if you’re putting together a cabaret or are singing in an open venue, because they come with CDs of the music being sung, and just instrumental. However, they are a popular commodity and used by many voice teachers and singers. Unless you excel at one of the songs it contains, don’t risk it. As mentioned below, if it’s overused, the auditioners are going to be sick of hearing it – which translates into not listening to you!

Choosing your monologue and/or song is something that is very personal, maybe too personal. You may see yourself as the sexy businessperson but appear as the-boy-or-girl-next-door type. In this case, The Barrow Group can help you pick excellent material that will showcase the you whom you have to sell. Our professional instructors are very familiar with a myriad of shows in all genres, and so could guide you with an eye towards what type you are.

How to Stand Out

Let’s face it – just like mass auditions in NYC, you need to do something to separate you from the crowd. However, many of these theaters cater to small town clientele, so purple hair may not get you cast. They want to see natural-looking actresses and actors that they can picture in the roles they need to cast. Don’t make it too hard for them.

1. Have a “Look”. Dress to impress, and if you have your red audition dress, now is the time to bring it out. Bright colors will set you apart from others, whereas small patterns tend to blend into the background. Add a scarf, or a bow-tie. If you are called back, be sure to wear the same thing. After seeing so many people, they’ll remember you as “the woman in the red dress” or “the gentleman with the bow-tie.” Don’t confuse your auditioners; make remembering you easy for them. This applies to New York City and other callbacks as well. Especially if it was a big cattle call – they may only remember what you wore and what you performed, but not the face. Remember, they see hundreds of performers at these auditions.

2. Choose Monologues and Songs that are Familiar, but Not Overused. Sitting in the audience at the SETC’s, seven girls in a row sang “Someone Like You” from Jekyll and Hyde. By the second rendition, they were tuned out. Find a song from an older musical, not one currently on Broadway. Everyone will be doing selections from Angels in America and Hamilton. In fact, here is a list a college provided cataloguing overdone songs and monologues: Auditioning for College – Do Not Lists Overdone Songs and Monologues. NOTE: This is list for college-age students and is dated, so ignore anything that isn’t appropriate to your age, such as playing a mother or a father if you are old enough to be one. Missing from this list are “Defying Gravity” from Wicked, “Art is Calling for Me (The Prima Donna Song”) by Victor Herbert from The Enchantress, “Meadowlark” from The Baker’s Wife, and “All I Need is the Girl” from Gypsy. As they mention, avoid signature songs, like “Somewhere Over the Rainbow” by Judy Garland or “People” by Barbara Streisand. The auditioners will compare you to the original and, even if you have a totally unique take on the song, it might backfire on you to be equated to a legend.

3. Practice Your Introduction and Farewell. This seems like an obvious, but when you first say “Hello, my name is _______________”, an assumption is made right then to your character. Be full of energy, but not over-the-top. Be friendly, approachable; make it seem that you are all good friends and you’re here to fulfill their need for a performer. Be confident, but not overbearing. You also don’t want to blow off your “Thank you” (which you should say at the end of every audition). Make it warm, gracious, not a throw-away. Truly thank the producers and directors, and your accompanist, for their valuable time. This applies to auditions in NYC, and other venues as well.

The New England Theatre Conference and the Southeastern Theater Conference are excellent opportunities to be seen by a plethora of theaters, cruise lines and other casting agencies. They are unusual in their limited time format and number of auditionees, but if you prepare for them correctly, you’ll shine and be the darling of many a caster!*

Unfortunately, the NETCs have not updated their website from the 2018 audition season but keep checking for it to become timely.