Acting is something many children want to do. A lot of kids even want to be actors when they grow up. Taking youth theater classes gives them a good foundation to build off of, should that dream become a reality they want to pursue. However, before they decide what they want to be when they grow up, they can simply have fun going to kids theater classes.

Ways of Having Fun at Kids Theater Classes

It is always fun to play pretend. That is basically what acting starts out as. Kids get to pretend they are whoever they want to be at these youth theater classes. They get to learn how to become another person, if even for a moment. They get to challenge each other and understand what it takes to believably become someone else. Plus, they get to connect with other kids who share the same passion they do. Seeing how each of their friends gets into character can be inspiring, and it allows each child’s acting education to grow based on what they see in each other. 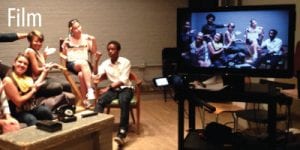 But taking an acting class is more than just fun for your children. It’s also a chance to learn a number of skills that will help them in their professional careers. Acting teaches kids to be confident on the stage. They will learn to trust themselves and their fellow actors to create an experience the audience loves. They will learn how to be comfortable in front of people and how to project and emote, something that will help those who routinely speak to a crowd as part of their job. It can even lead to an unexpected hobby or career by exposing young actors to directing, playwriting, costuming, or lighting.

For more information on theater classes for kids in the New York area, contact The Barrow Group today!

Our Youth Theater Classes for kids in New York City open the door of confidence to children, allowing them to enjoy standing onstage in front of an audience and perform, having fun. This gives them confidence in most walks of life, even if they decide to be something other than an actor. Public Speaking is listed by many sources as a fear greater than death, and these New York City acting classes for kids help ease that fear and learn to take risks. Confidence is the hallmark of a trained actor, and the children who have taken these classes have shown great improvement. Most importantly, they enjoy the experience and genuinely have fun.

Youth Theatre Classes for kids in New York City are where your child’s dream can come true. Acting is a passion, not easily pushed aside or thwarted, and by enrolling them in our program, you will feed that hunger and help them to be the best performer possible. Students who graduate from this program of acting lessons for kids are friendly, confident and easily make friends. Whether or not they go into acting, they will learn skills that will apply throughout life. Additionally, they have a good time in their classes and leave each lesson with a smile on their face.

Having fun is important to your children, and they can experience that in The Barrow Group’s kids theater classes in New York City. They will have the opportunity to express themselves completely, pretending to be characters, participating in improvised scenes, learning lines, and interacting with other kids in the acting class. They will learn from the most professional instructors, as well as from their peers. If you want your child to have a good time in acting classes for kids, in the professional arena that is New York City, The Barrow Group’s theater classes for kids are the perfect match. Your child will have fun learning and growing, and you’ll be impressed with their progress. It’s the best thing you can do for your child and their self-esteem.

Learning Responsibility as Well as Having Fun

When looking for youth theater classes, only the best will do, one with years of experience of working with children and teens, such as The Barrow Group. Not only will your child have the excitement of acting, but they are learning responsibility too. Memorizing lines and blocking, listening to a director and following directions, recognizing patience is necessary … all of these things are intrinsic to an actor. These responsibilities and more will also serve your child in life outside theater classes. The best part is that while studying, the enjoyment factor inherent in acting turns lessons into adventures.

Children and teenagers have great imaginations. The youth or kids theater classes provided by The Barrow Group in New York City stimulate them, training students to utilize creativity and feeding that gift that so many others lack. Your child is special, and you want them to be recognized for such. Acting brings out the sparkle in each individual who is creative enough to excel in this demanding field. We stimulate our students’ imaginations through acting, directing, screenwriting, improv, etc., and the results are exemplary. In our youth theater classes, we challenge our students to be the best that they can be.

The Benefits of Starting Early

If your child is considering acting, The Barrow Group’s Kids Theater Classes are a great start. We specialize in working with young talent, bringing their skills to the forefront and preparing them for a professional career. Many of today’s stars started as child actors, including Sean Astin, Drew Barrymore, and Will Smith. Your kids will not only learn how to act, but also how to behave professionally. They must respect authority figures, such as the director, and follow directions without balking. They use their creativity to make the character their own, which pleases the production team. They study how to create a character, utilizing the tools given to them in these acting classes for kids. All of this manifests into an actor with whom producers and directors will want to work, preparing them for a career on stage or screen.