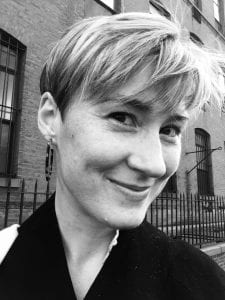 About Jessica:
Jessica Love is a working actor. She trained at the Juilliard School, where she studied with world renowned dialect coach Gillian Lane Plescia. Jessica has coached privately for years, and fanatically believes that a specific dialect creates a specific character. Jessica has appeared both on Broadway and off, at Playwrights Horizons, The Atlantic Theater, The Pearl, Hudson Valley Shakespeare Festival, The Studio Theater (DC), The Denver Center, The Old Globe, and on television… more often than not, with a dialect. She is also a children’s book author and illustrator.

A good dialect can make or break a performance. We have all seen it happen. Both ways. The goal of this class is to teach you how to make a dialect work for you, rather than putting you in your head.  It is a prop; an activity, for your voice. When you are in the pocket with a dialect, it actually can act as a shortcut–connecting you with your body and your impulses; getting you closer to actually living on stage or in front of a camera, instead of acting. When a dialect is accurate and specific it can unlock impulses and illuminate qualities in your character which might not have been evident to you when you were just guessing at what this person sounded like. Confidence with dialects is a secret weapon. I’m here to arm you.

This class will be divided into three sections.

In the first two classes we will sort out how to learn a new dialect. You’ll get the tools and resources you will utilize throughout the course (and throughout your career) to learn new dialects. We’ll break down the steps of taking an accent from “I can’t do a Danish accent” to “I can totally do an Danish accent” so that the next time you get asked to do something you don’t have in your back pocket, you’ll have a technique to get you there.

In the third and fourth classes we will work on the dialects of the English language you will encounter most frequently in auditions, and which you ought to be able to pull out of your back pocket and slip into easily, i.e. British, Irish, Scottish, Australian and various American dialects.

In the fifth and sixth classes you will each choose a dialect to work on. This is your opportunity to absolutely nail that accent you keep having to do in auditions because you look like you could plausibly be from the place where people speak that way (but you aren’t). This is your chance to really get specific and confident. This is the accent you use to trick people at the bar. This is the dialect that gets you the job.

Dialects for the Actor IDates TBA

In this advanced class, students will get very specific with learning  Australian, Yorkshire (Northern England), and one of the the following; Slavic, Ukranian, Russian, or Belarussian dialects. Two weeks will be spent on each dialect; in the first week students will learn and practice the specifics of each and in the second week students will apply this to scene work.

Dialects for the Actor I is a prerequisite for this class.

Dialects for the Actor IIDates TBA