For this edition of First Fridays, we are accepting submissions of works-in-progress from writers inspired by the following themes:

For the first edition of First Fridays in the new year, we are exploring issues of sickness and health, with a focus on what it means to heal or “get better.” As a cancer survivor with a rare autoimmune disease, I’m often consumed by these themes and the pandemic thrust them into our collective consciousness. The most vulnerable among us were the most severely impacted and none of us was free from concern about the health of our neighbors, friends, and family. As we continue to face a variety of threats to our public health, including racism, gun violence, gender and sexuality discrimination, and of course, Coronavirus, I’m more curious than ever to explore what it means to heal and better care for ourselves and each other. For me, that definitely involves storytelling and laughter. I’m grateful for the opportunity to hear your stories related to anything above or the themes below.
-Kristen Howard

WANT TO GET INVOLVED?
Writers
We are accepting up to 10 pages of scripts-in-progress from plays, screenplays, web series, or one-acts. Email your 10 pages or less to [email protected] by Saturday, January 1st at 5pm ET. All writers chosen will receive a $50 stipend.
Actors
The plays will be cast the night of the event. To be considered for casting, reserve your free ticket here and login by 6pm ET on January 7th.
Audience
If you want to watch the readings, reserve your free ticket here and login at 7pm EDT on January 7th.
**If the event is sold out on our calendar, email [email protected] to be put on the waitlist.

First Fridays is a free monthly curated event that offers artists the opportunity to share their work, practice their craft, and connect with fellow creators. Writers are pre-selected to share up to 10 pages of their script-in-progress and actors are cast on the spot to participate. Learn more and reserve your free tickets here. Please note, all writers selected each month will be considered for the First Fridays Festival— our culminating event in June 2022. Writers will be paired with TBG directors to cast and workshop the pieces, which will be shared in front of an audience. All artists involved receive a stipend. 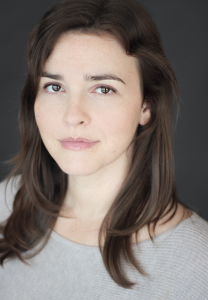 About this month’s host: Kristen Howard was born and raised in East Lansing, Michigan, is a graduate of The University of Michigan, and has called New York City home for over seventeen years. In 2009, she opened a skateboard shop in the West Village called Uncle Funky’s Boards. A Non-Hodgkin’s Lymphoma diagnosis in 2011 and subsequent treatment gave Kristen a renewed sense of purpose and affirmed for her that life is too short not to do what you love. She graduated from the 2-year conservatory Meisner acting program at William Esper Studio in 2016 and feels a tremendous sense of gratitude to have studied with Suzanne Esper. She is a member of The Barrow Group’s 2018/2019 Intern Company, where she studied acting with Shannon Patterson and worked in the Marketing Department. Kristen played Mary Epperson, wife of Frank Epperson, inventor of the popsicle, on The History Channel’s “Ice Cream Wars” episode of The Food That Built America. Kristen shot three films in 2021, including her feature film debut, an action thriller titled Cut & Run, slated for 2022 release. Kristen is writing a TV show called BETTER about a highly imperfect young woman living with cancer in New York City. In real life, Kristen continues to manage a rare autoimmune disease called Behcets, but will celebrate 10 years cancer free in the Spring. She is also the proud human of a super sweet rescue puppy named Gus.