For this edition of First Fridays, we are accepting submissions of works-in-progress from Caribbean writers inspired by the following themes:

“My uncle Jacques told me that my father traveled to America from Haiti when he was 23 years old. His grandparents sold their livestock to get him the paperwork and plane ticket and he landed in New Jersey. He came to this country with nothing:didn’t speak English, didn’t know anyone. He soon moved to Cambridge, Massachusetts, and became a part of the huge Haitian Community in Cambridge and Somerville.

I am grateful that my father was able to come to America because he did so many great things with his life. And it has allowed me to be blessed with so many opportunities. Yet I often feel like he didn’t have a choice to remain in the country where he was born.

I often joke that I wanted to be born in Haiti so that I could sit under an avocado tree, eat mangoes, and swim all day! What would my life have been like if Haiti were more stabilized? I have always wondered about my father’s travels and what life was like for him when he came to America. He passed away so I will never get to find out more. But I am so grateful for my Uncle Jacque’s stories. He loves to tell stories!

As I see the many Haitian who have traveled for thousands of miles only to be turned away and/or sent back to Haiti, I think of my father and my mother, and countless family members and friends, and realize that could be us. I don’t know whether to be sad or grateful. Most days I’m just frustrated and some days I’m angry. Do people know the history of Haiti which has allowed what seems to be the continual deterioration of this beautiful country?

At school I was made to feel ashamed of my Haitian Heritage. When I finally learned that Haiti was the First Free Republic in the Western Hemisphere and it had once been one of the richest countries in the Caribbean, I remember feeling so proud and wanted to tell my elementary schoolmates what our history books failed to tell us! Including the teachers! Look at Haiti now: bankrupt because they paid an enslaved tax to France, devastated by natural disasters, weak infrastructure, and political upheaval and strife. I wonder will Haiti ever be the country it once was? Will the Haitian people ever get to rule their own country?

My mother once told me that my great-grandmother on her side was Cuban. I learned through research that Haitians have come from Senegal to the Congo as well as Central Africa. This was too general, and I wanted to know more. What country/city/village did my ancestors come from? Who are my ancestors? What language did they speak? What were their names? What is my actual name?

Premier Janvier (First of January) will be next month. It is a huge Haitian Holiday because after 13 years of fighting for their freedom with European warships circling their waters, they were free! On January 1, 1804, Jean Jacques Dessalines declared Haiti’s Independence from French colonizers. They celebrated their freedom by drinking soup joumou (squash soup.) I always look forward to having this soup. Sadly, I used to complain about having it when I was younger, never knowing the history. So, in honor of Premier Janvier I’d love for Caribbean writers to consider the inspiration above.

For my Haitian peeps bonus if you add some Haitian Creole (translated of course) in there!

I still have hope that one day I will get to retire to Haiti and eat those mangoes under that avocado tree and finally see the country where my parents were born and lived. Maybe then I can get the answers I am looking for. I love that no matter what has happened through the years Haiti is still here! Looking forward to reading your pieces!”

WANT TO GET INVOLVED?
Writers
We are accepting up to 10 pages of scripts-in-progress from plays, screenplays, web series, or one-acts. Email your 10 pages or less to [email protected]by Friday, November 26h at 5pm ET. All writers chosen will receive a $50 stipend.
Actors
The plays will be cast the night of the event. To be considered for casting, reserve your free ticket here and login by 6pm ET on December 3rd.
Audience
If you want to watch the readings, reserve your free ticket here  and login at 7pm EDT on December 3rd.
**If the event is sold out on our calendar, email [email protected] to be put on the waitlist.

First Fridays is a free monthly curated event that offers artists the opportunity to share their work, practice their craft, and connect with fellow creators. Writers are pre-selected to share up to 10 pages of their script-in-progress and actors are cast on the spot to participate. Learn more and reserve your free tickets here.Please note, all writers selected each month will be considered for the First Fridays Festival— our culminating event in June 2022. Writers will be paired with TBG directors to cast and workshop the pieces, which will be shared in front of an audience. All artists involved receive a stipend.

About this month’s host: Lunie Jules 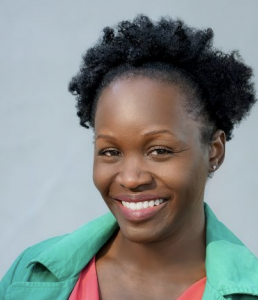 Believe it or not Lunie became enthralled with acting when, at the age of seven, she began watching music videos such as Sade’s “Smooth Operator” and Whitney Houston’s “Greatest Love of All” on MTV.

Lunie Jules is a Haitian-American actress, teaching artist, and writer based in New York City. As an award-winning actress and writer, she has been seen in The Barrow Group’s Apprentice Company, Teatro SEA, Theatre 80, AlphaNYC Theatre Co, and the New Perspective Theater. Lunie has had the privilege of performing in Shakespeare’s Cymbeline with Art for Progress where the group raised money for important, artistic, children’s programming.

Lunie’s one-woman show Disparate Human aka Angry Haitian Woman was showcased at the Failsafe Festival and she is proud of her work on Digital Physics which was seen at several film festivals. She also had the pleasure of working with many of her Barrow Group friends on the short film, Enjoy the Day, which was submitted to the International Film Festival Manhattan. She won best-supporting actress at the NYC 48 Hour Film Festival for her work in New York Scourge and produced a short film Gone FiSSion

Lunie is usually cast as the smart scientist, the investigative reporter, or the young professional mom. She loves to spread joy and have fun by playing complex and three-dimensional characters. One of her goals is to have better representation of Haitians, both on stage and on screen.

As a teaching artist at the Barrow Group, Lunie enjoys her work with children as they use their imagination to create stories and develop characters. She also enjoys seeing the aha moment when teaching beginning acting to adults.  Her goals are for students to feel empowered in their work, to know that they are enough, and to learn to trust their gut.

When Lunie isn’t working you can catch her either thrifting for amazing statement pieces or binge-watching an old tv show. She is currently working on an eco-conscious, empowering, and inspirational t-shirt line that will be launching soon. Her website LunieJules.co, is currently under construction, but you may sign up to receive updates. You may also follow her on social media: @LunieJules on Instagram, Facebook, and Twitter.