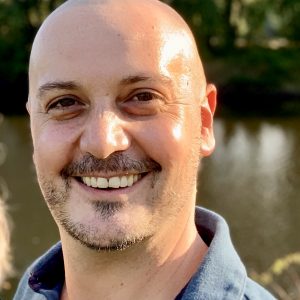 A NOTE OF GRATITUDE FROM ROBERT:

I first encountered TBG as a student back in 2008. I’d just finished an MFA in acting and was teaching at Emerson College and acting in Boston. A friend recommended I check out The Barrow Group. After reading Seth’s AN ACTORS COMPANION, I started commuting down to NYC weekly to study at TBG.

I so loved the kindness, sense of community, and profoundly simple, effective teaching. I started volunteering as I heard rumblings that the company was having some financial trouble coming out of the 2009 recession, and I wanted to help. A couple of months later, in September 2010, I sat down with Seth at the Tick Tock Diner. We discussed me coming on to work at TBG as the Director of Education.

Even though I had a steady teaching gig and was busy as an actor in Boston, I jumped at this chance. I’d had such a positive experience at TBG. I wanted to share it with others. Thus began a wild ride over the past 11 years – growing the number of students and patrons TBG annually serves from roughly 1,500 to over 11,000.  Go team-TBG!

Early on, in 2011, I was fortunate to discover tuition remission when Pace University picked me up to teach voice and speech (I’m also a Designated Linklater Voice Teacher) at the Actors Studio MFA Program. As long as I taught at Pace, I could take free classes.

I’d been watching the WIRE and got inspired by Stringer Bell going back to community college to take business classes. So, almost on a lark, I took the GRE (math!?) and was accepted to the Pace University Lubin School of Business. That was in 2012.

Nine. Years. Later. I’m getting an MBA. And, apparently, I’m top of my class in the Strategy department.

I say “apparently” because it came as a shock when I received a note from Pace congratulating me on the Program Award in Strategic Management. See, I’d been taking the courses for the simple love of learning and to take what I was learning and bring it into my job at TBG. I’d never focused on the grades. I think that’s why I did so well — because I was just focused on the work and not on the outcome.

I’m super grateful that the universe brought me to The Barrow Group, revealing this wonderful opportunity to help grow the company while growing myself. Learning about data analysis, capital budgeting, variable vs. fixed costs, the time value of money, strategy fit, pitch deck, business plans, organizational development, linear programming — and getting to put these concepts into action with Seth, Lee, the Board, and fantastic staff — has been and continues to be a blast.

So, yeah, after nine years of study, I got an MBA. Never, in a million years, when I first started working at TBG, would I have imagined that. And, coming out of the pandemic, empowered with this knowledge, I’m thankful for the opportunity to help rebuild TBG and NYC culture and enrich thousands of lives through the transformative power of art.

To any artist reading this, here’s what I’ve learned so far from this adventure — slow and steady wins the race — and, if you want something, go for it. Even if it might take a while.