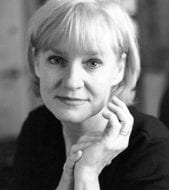 Arlene Hutton is best known as the author of The Nibroc Trilogy, which includes Last Train to Nibroc (New York Drama League Best Play nomination), See Rock City (Spirit of America Award) and Gulf View Drive (LA Weekly and Ovation Award nominations). Regional credits include Cincinnati Playhouse in the Park, B Street Theatre, Kitchen Theatre, Echo Theatre, Florida Studio Theatre and Chester Theatre. She is a three-time winner of the Samuel French Short Play Festival and a seven-time finalist for the Actors Theatre of Louisville Ten-Minute Play Contest. Her short plays include 40 Stat. 76, Man in the Basement, and Closing Costs, all for The Barrow Group’s SHORT STUFF, and, for Fast and FAB, Intermission, After Intermission, Vociferation and Mourning Star (written for and performed by Lynn Cohen). Hutton’s full-length plays and one-acts have been produced at regional theatres and colleges around the country, at the Edinburgh Festival Fringe, for FringeNYC, and at theatres in NYC and abroad. A member of Ensemble Studio Theatre and an alumna of New Dramatists, Hutton has been a respondent for short plays for KC/ACTF. Her work appears in textbook and best play anthologies and is published by Samuel French, Playscripts and Dramatists Play Service. www.arlenehutton.com

“Arlene Hutton is so supportive of her students, so genuine in her enthusiasm, so encouraging of exploration. I was talking to some of the other students as we left, and there was a consensus of buoyed enthusiasm and excitement from everyone in the room. People left her workshop truly excited to write. I think that she gave a lot of students back their confidence and inspired newfound passion for the craft in others.” –Becca Worthington, playwright