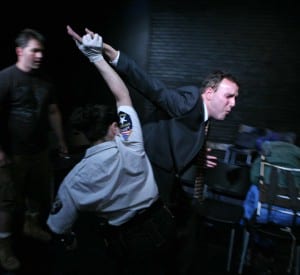 “I am so grateful that Ron was brought in to take charge of all the gang fighting in WEST SIDE STORY. He gave it the look of real fighting it badly needed but did it in a way that minimized the danger of anyone getting hurt (and on their own, the boys were getting hurt much too often). Unlike most people I have seen in Ron’s position, he didn’t work as a macho machine but as the extremely agreeable, amiable and enthusiastic man he is. We’re going to have Ron come around again and again.” — Arthur Laurents, director, WEST SIDE STORY

Learn safe techniques for executing violence on stage. This workshop will concentrate on fundamentals of safety, while teaching students how to fall, punch, slap, kick, wrestle.

Taught by Ron Piretti – Fight Director for the Broadway productions of “West Side Story”, “In the Heights”, “The Miracle Worker” and fight supervisor for “Bengal Tiger at the Bagdad Zoo”.

Check out this video from Arts in the City featuring Ron:

Check out this video from CUNY TV featuring Ron: