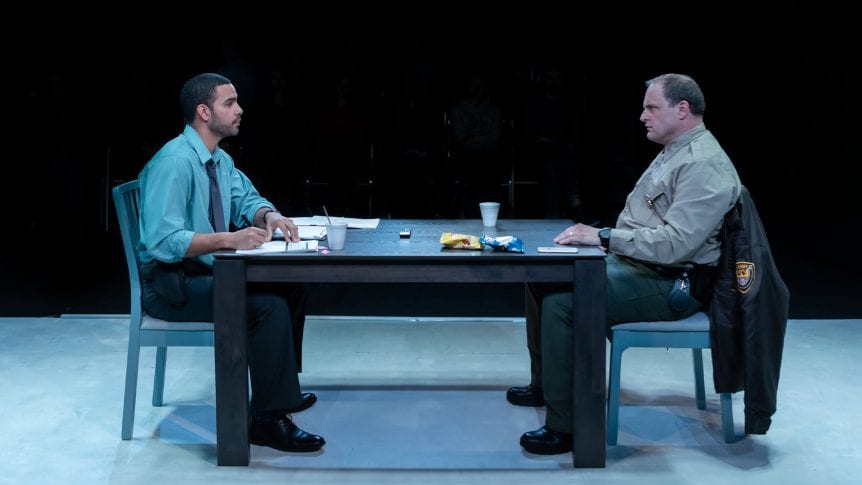 IN BRIEF:  Our highest recommendation!   Riveting drama that brings to mind the Parkland school massacre in which a security guard failed to take action against a student shooter.  This brilliant work explores the meanings of such a  tragedy to all involved — through brilliant playwriting, acting, and directing.   Once again the invaluable Barrow Group brings us theater that is outstanding in both artistry and relevance.

You may remember the case of the “Coward from Broward”, as the evasive Florida security guard came to be called.   But you did not likely take any time considering how his failure might have played out in the ensuing several months, as the case was investigated and the community sought solace.   What did it do to the man’s co-workers —  including the other guard, a female officer,  who did confront the shooter?   Or to the guard’s family?  Or to his other relations in the community?   Or…to his own soul?

These are the issues portrayed with fierce attention and trenchant insight in this extraordinary  theater piece. In 7 gripping scenes we traverse the paths that each person pursues in seeking redemption, solace, and meaning.

As we witness the reactions throughout the community, we may well be reminded of Ibsen’s “An Enemy of the People”, about another character who becomes the target of his community’s shaming.  So it’s interesting to note that the magnificent actor who plays the security guard here, Larry Mitchell, was most recently seen in the title role in that Ibsen play.  (Moreover,  we learn from the other actors’ bios in the Program booklet, how immensely grateful most of them are, to Barrow for years of mentoring, support, and inspiration.  This Group is a true community of theater artists, and it shows in their consistently outstanding offerings.)

Here, Shannon Patterson leaves us breathless as the guard who did step up, as she discloses the shocking thoughts she had when confronting the gunman face-to-face.

The rest of the ensemble are each wonderful in their own way.  DeAnna Lenhart is superb as the guard’s resourceful but defeated wife, Brian Rojas excels in his Off-Broadway debut as the investigating police officer, Michael Giese is gripping as “the second most-hated person in the community”, and Barrow mainstay Lee Brock delivers a stunning final scene with the protagonist.  Throughout, the masterful hand of director Seth Barrish makes it all work!

Commendably, Barrow is offering Talk Backs an numerous upcoming performances, so you may want to choose one of these.  Each occurs directly after the performance, and take about 30 minutes.