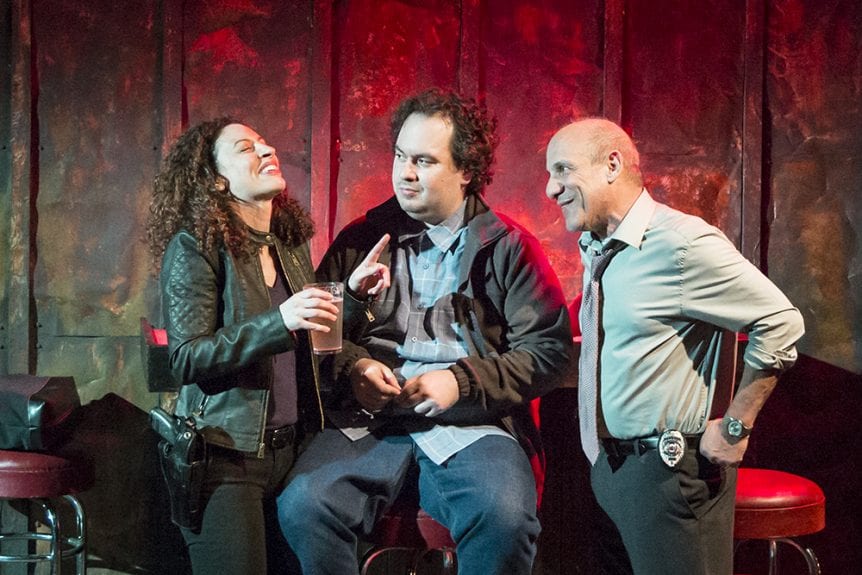 BOTTOM LINE: Our highest recommendation! A thriller “ripped from the headlines” combined with a harrowing archetype out of the Brothers Grimm. Great playwriting, brilliant performances, masterful direction.

Remember how you were entranced as a very young child, by your first exposure to those wondrous and terrifying “fairy tales” and folk myths – the ones about a child wandering off into the dark woods, and encountering malevolent personages? And how wonderful it was to experience the little hero’s triumph over evil?

You’ll find it again in this utterly original production – original in its characters, its plot, and its impact. The justly esteemed Barrow Group gives us another theatrical adventure.

There’s a vicious killer on the loose and the kindhearted Douglass finds himself the unwitting target of detectives who need a win at any cost. Desperate to seek justice, Douglass sets out on a harrowing, fantastical quest to find the true perpetrator. In this riveting world premiere, the lines between good and evil blur in a divine search for redemption.

Douglass, the central figure played superbly by Ali Arkane, is the target of an opening interrogation by a duo of bad-cops-bad-cops enacted with verve and wit by Tricia Alexandro and Paul Ben-Victor. (She’s reknowned for her monologues at the Bowery Poetry Club.)

After a spell in prison where he is befriended by a cell-mate, Myron (brought to life as a pillar of wisdom, savvy, and kindness by the greatly gifted Craig Mums Grant, well-remembered from several roles in productions at the Public), Douglass hits the dark woods where he encounters Harry, a mysterious character who entices Douglass into a dance to the death (or redemption!).

The triumph of the piece is to see how Douglass is revealed to have an iron integrity and (gulp!) a direct access to the divine. Moreover, his indomitable resilience derives from an astonishing awareness of the crucial role played by earth’s simplest creature. This is a level of discourse and action not often seen even on the Off-Broadway stage!

TIP: Look for the square chit in your program, inviting you to share your responses to the show on the “Experience Wall” in the theater lobby (or how to do it on-line later if you prefer). It’s a welcome way to express your thoughts, see what others think, and encourage conversations prompted by the performance.