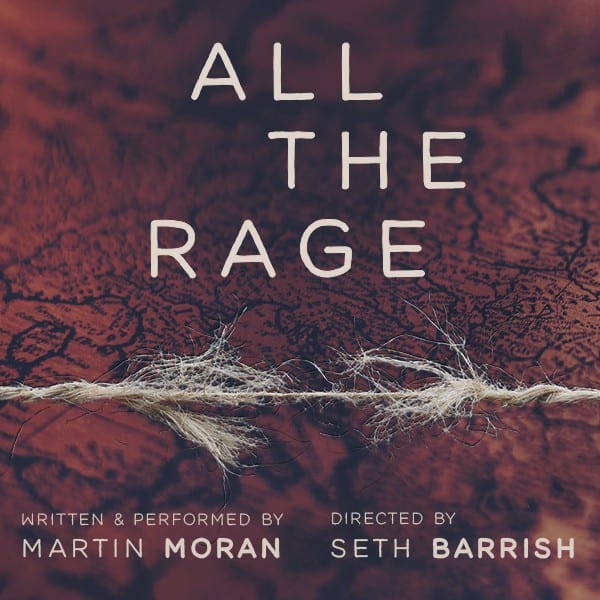 Martin Moran should have more rage about the crime he experienced as a boy, shouldn’t he!?  Where is it!? Haunted by this question, Martin sets out on a quest that leads him around the globe—working as a translator for an African asylum-seeker, who was subjected to torture; encountering his stepmother in Colorado; getting lost in South Africa; and uncovering truths at the Cradle of Human Kind. With equal parts honesty and entertainment, All The Rage attempts to solve an ancient human riddle: How is it that one moment we might reach out in compassion and the next…kill?

For each TBG production, we offer a variety of talkbacks following select performances to enrich the audience experience. Below are the currently scheduled talkbacks for All The Rage. 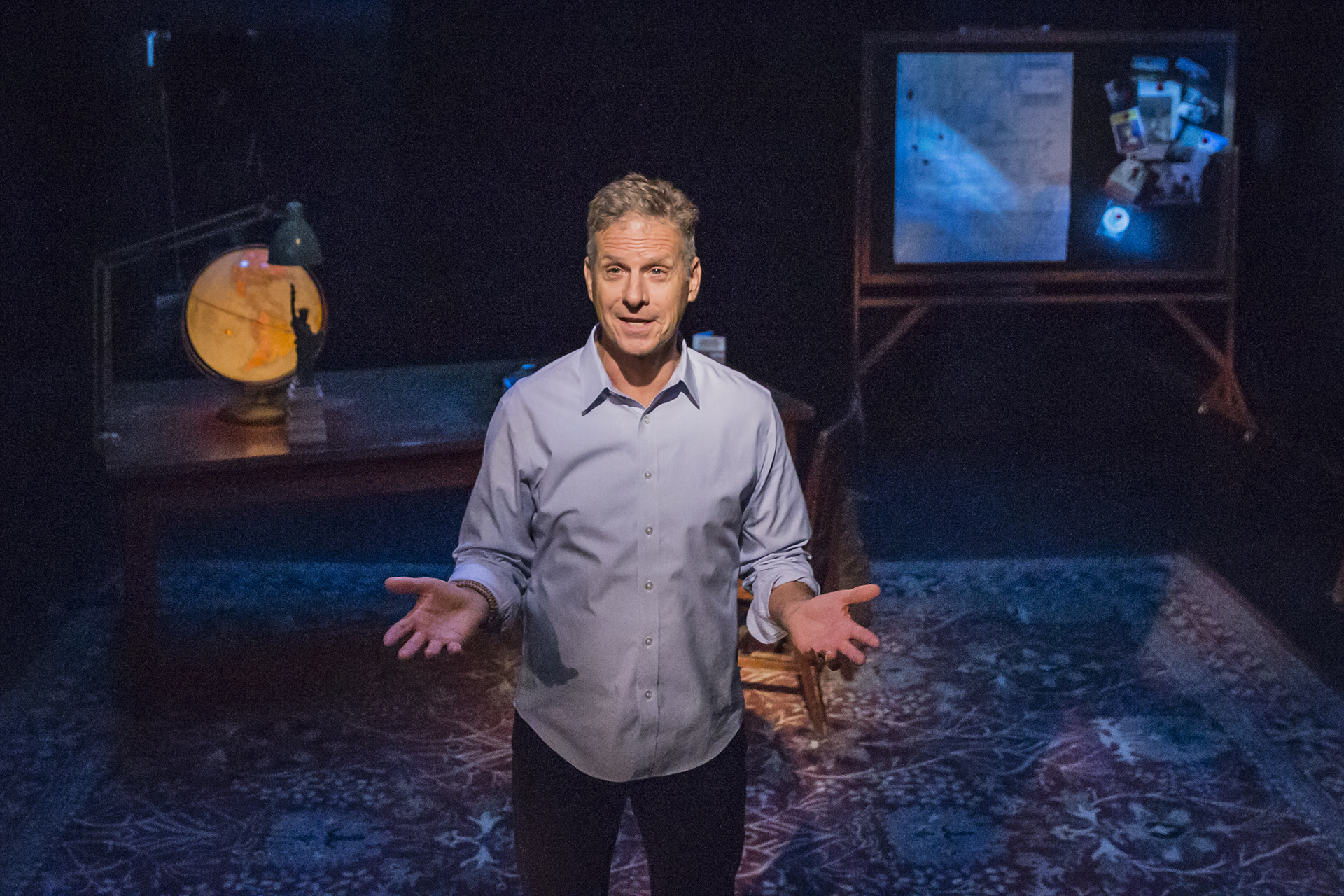 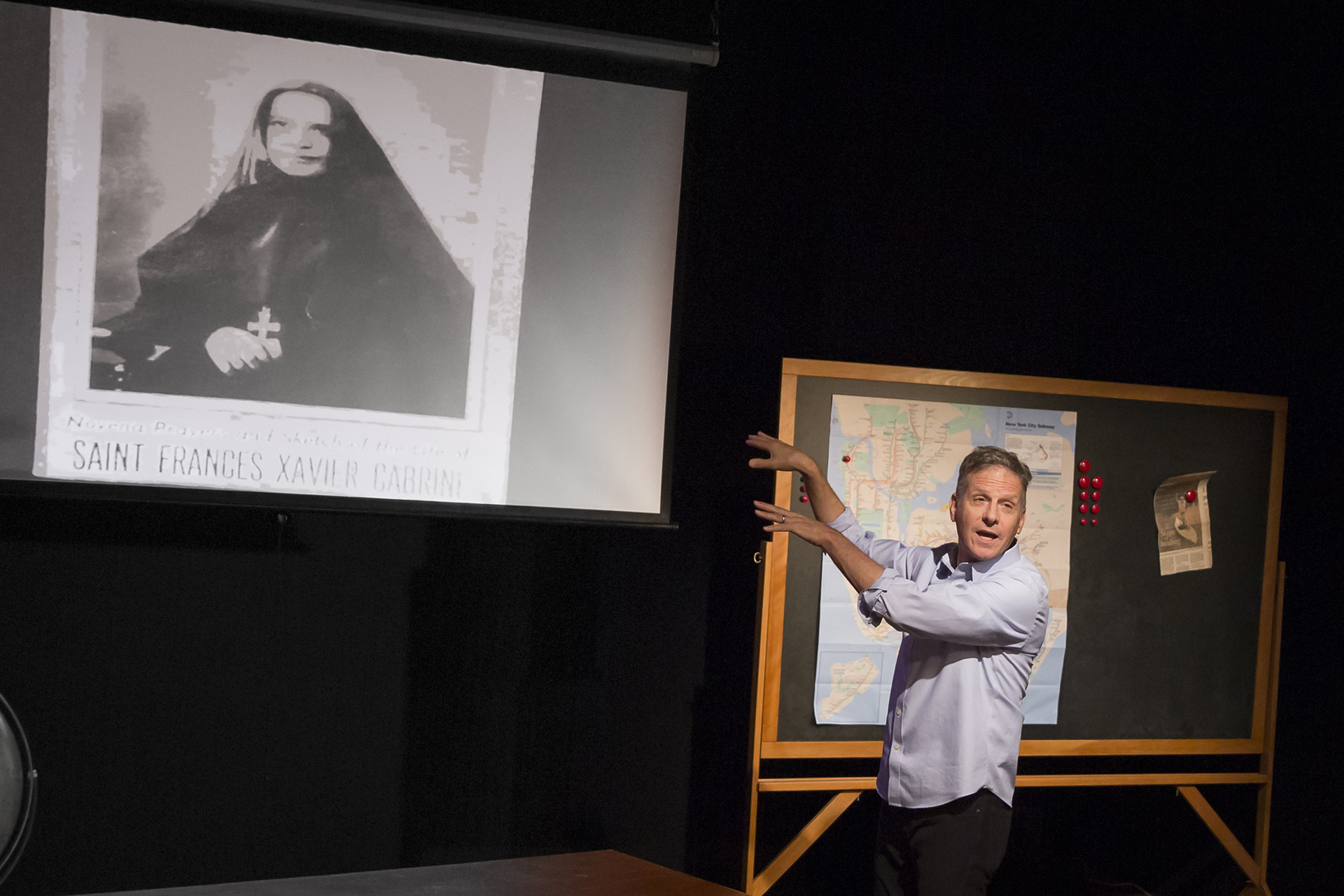 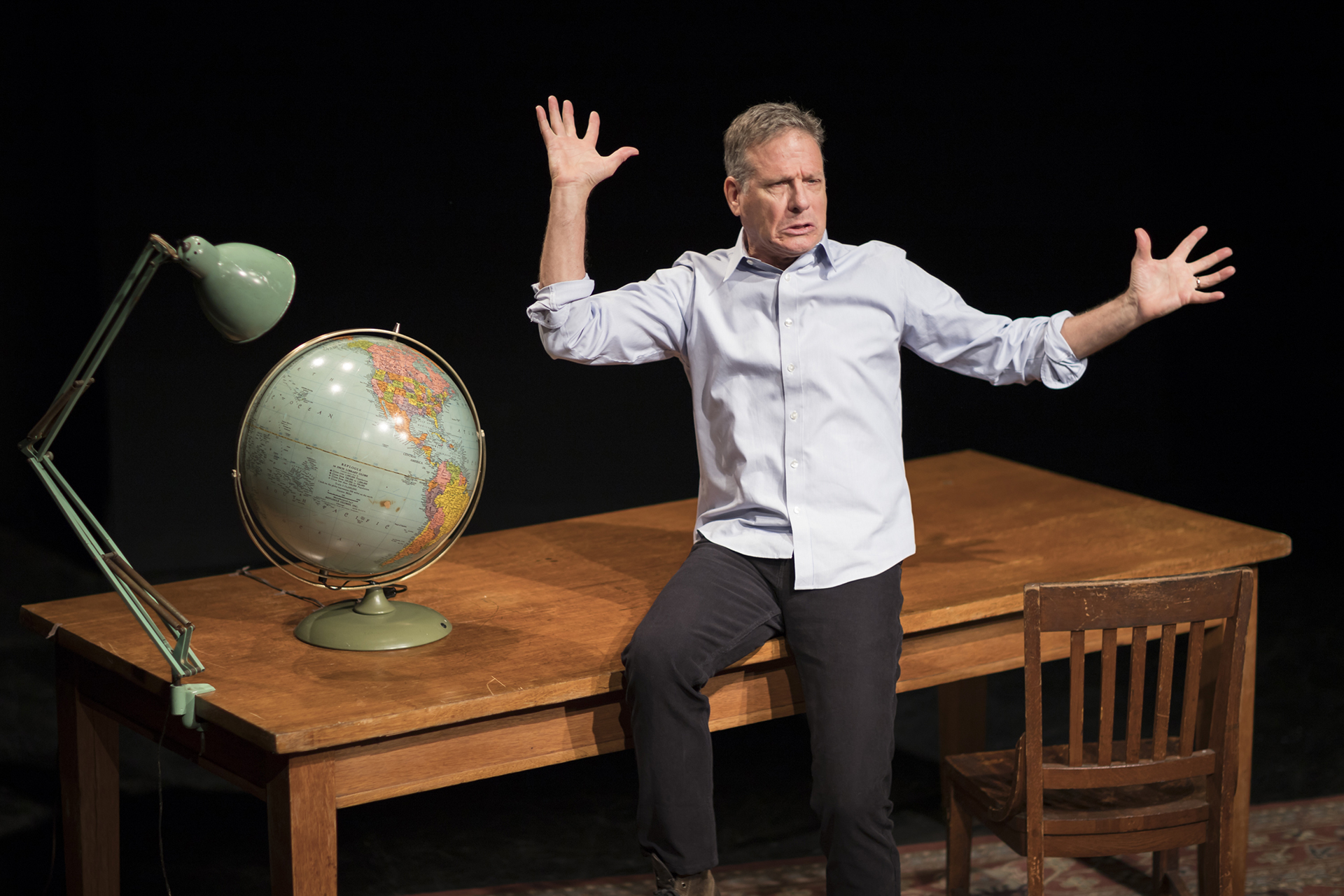 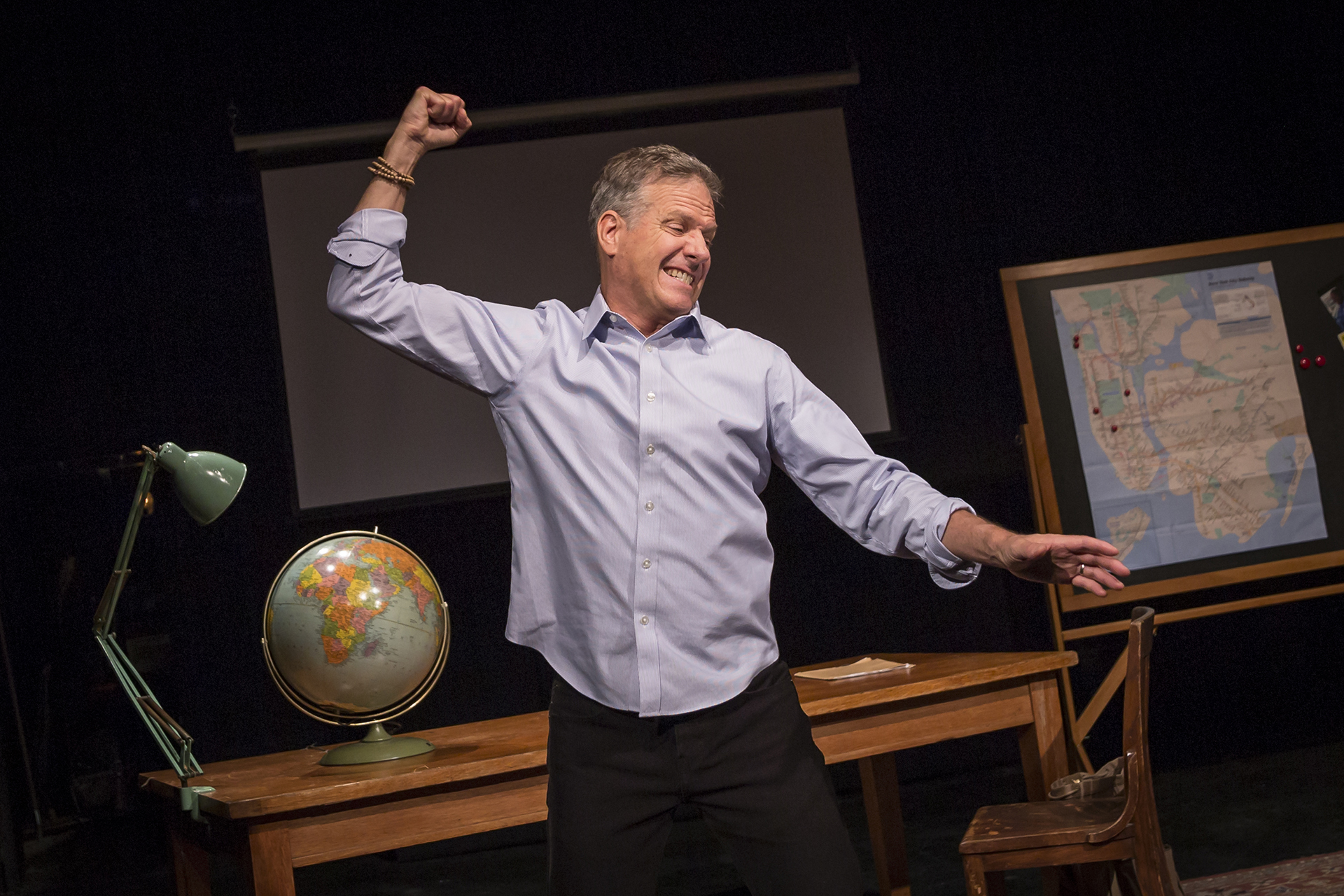 REVIEWS OF ALL THE RAGE

Critical Praise for All the Rage

“Profoundly touching. This soulful show leads you into thought-and-emotion-stirring territory that you don’t often visit at the theater.”
– Ben Brantley, The New York Times

“All The Rage presents as a breezy tour of a midlife crisis, then positions us over trapdoors that lead to subcellars of pain and fury. Beneath the diplomatic smiles and the inner-seething is a half-hidden tale of loss – and Moran’s too skilled an entertainer to make it all mordantly funny.”  – New York Magazine, Critic’s Pick

“A potent and deeply moving monologue about living with forgiveness without getting all mushy about it. Don’t miss this gem of a show!”  – Bloomberg News

About the Playwright and Performer 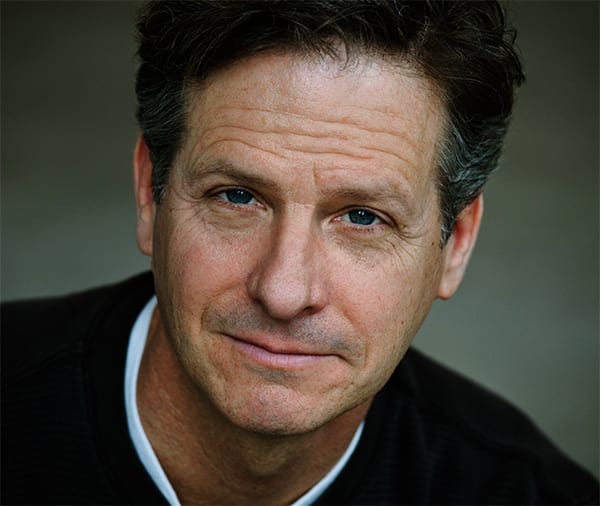 Martin Moran’s latest play, THEO, premiered this past spring at Two River Theater. His one-man play, All The Rage, received a 2013 Lucille Lortel Award and an Outer Critics Circle Award nomination for Outstanding Off Broadway Solo Show.  He received a 2004 OBIE and two Drama Desk nominations for The Tricky Part, based upon his memoir (of the same title), which won the 2005 Lambda Non-Fiction Prize and Barnes and Noble Discover Award. His Broadway and Off-Broadway performances include roles in: Spamalot, Cabaret, Titanic, Wicked, Bells Are Ringing, How To Succeed in Business…, Big River, Floyd Collins, (Playwrights Horizons) A Man of No Importance, (Lincoln Center Theater) 3 Kinds of Exile and Cider House Rules  at The Atlantic Theater Company and Mans A Man at Classic Stage Company. His film and Television work includes guest appearances on The Newsroom; The Big C; Z-Nation, Possible Side Affects; Private Parts; various Law &Orders; Dellaventura and Mary and Rhoda. He wrote the book and lyrics for the 2012 “Inner Voices” solo musical, Borrowed Dust, with composer Joseph Thalken. Moran’s writing has appeared in Ploughshares, the Pushcart Prize anthology and the New York Times. He was awarded a MacDowell Colony Fellowship and a New York Foundation for the Arts grant for Creative Non-fiction.  His second memoir, All The Rage, was released in 2016 by Beacon Press. 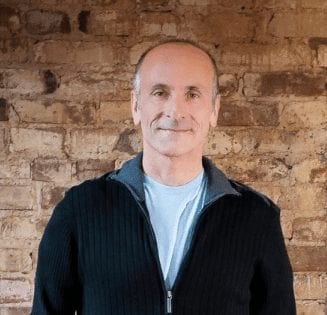 Seth Barrish is the Co-Founder and Co-Artistic Director of The Barrow Group.  Directing Credits include (Broadway) Mike Birbiglia’s The New One;  (Off Broadway) The New One (Drama Desk & Outer Critics Circle Awards OUTSTANDING SOLO PERFORMANCE); The Tricky Part (OBIE Award, Drama Desk Nominations for BEST PLAY and BEST SOLO SHOW), All The Rage (Lucille Lortel Award for BEST SOLO SHOW), My Girlfriend’s Boyfriend, (Lucille Lortel Award for BEST SOLO SHOW, Drama Desk and Outer Critics Circle nominations for BEST SOLO SHOW—Final performance at Carnegie Hall), Sleepwalk With Me (Nightlife Award for OUTSTANDING COMEDIAN IN A MAJOR PERFORMANCE), Pentecost (Drama Desk Nomination for BEST PLAY), Old Wicked Songs (Los Angeles Drama Critics Circle Award & Garland Award for BEST DIRECTION), and Good (Straw Hat Award for BEST DIRECTION), among dozens of productions spanning a 35-year career Broadway, Off-Broadway, Off-Off-Broadway, in regional theater and internationally. Seth co-directed Mike Birbiglia’s feature film Sleepwalk With Me. Seth is a professional acting and directing teacher and is author of the book An Actor’s Companion–Tools for the Working Actor. Seth co-directed the Netflix Comedy Special Thank God for Jokes and directed the Netflix Comedy Special Mike Birbiglia, My Girlfriend’s Boyfriend.  He was a consulting producer for the film Don’t Think Twice and a producer of Mike Birbiglia’s CD Sleepwalk With Me Live. As an actor, Seth appears regularly in film and on television.  Seth is also a composer (SESAC).