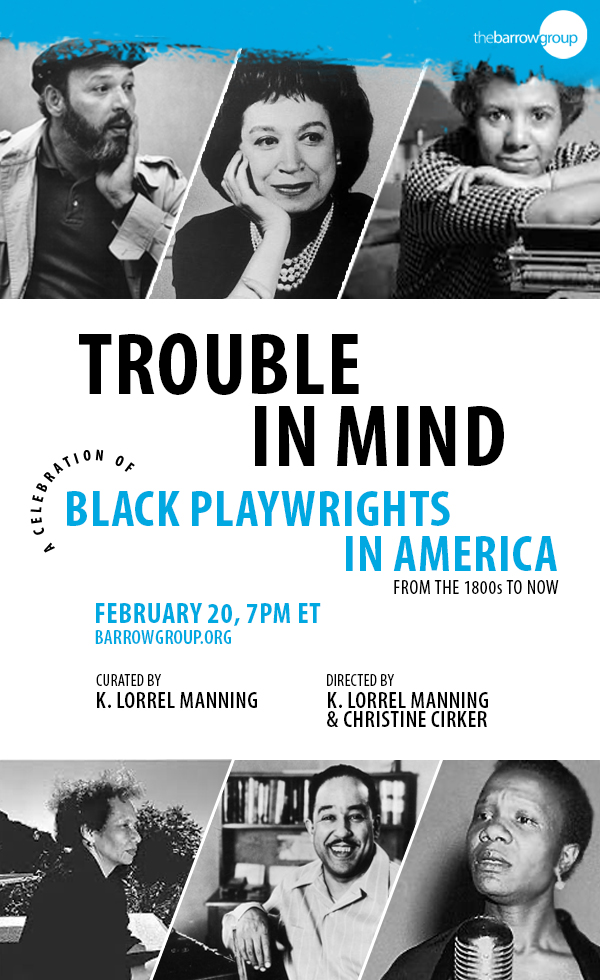 Join K. Lorrel Manning as he explores the journey of Black American playwriting from the 1800s through the present. This evening will feature twelve actors, sharing the voices of Langston Hughes, William Wells Brown, Lorraine Hansberry, Beah Richards, August Wilson and many more.

Alison Chace is a professional, classically trained, bi-coastal actress. She has considered The Barrow Group Theater her creative home in NYC for the past 4 years. Chace regularly contributes to a Zoom theater company that was founded by Lee Brock’s Master Class and has performed weekly readings every Sunday night throughout the pandemic. She’s also launched two comedy content production companies, The Dinger and Neurotica Productions, and performs comedy weekly with her improv team. In addition, as the founder of female empowerment business Pink Wisdom, Chace has interviewed leading experts on a podcast, published a book with relationship and career advice, and produced a documentary featuring 25 women from over 15 countries. www.alisonchace.com

Deon Frank has been acting for six years, having studied at The Barrow Group, Wynn Handman Studio, Deborah Hedwall Studio and The Susan Batson Studio to name a few. His credits include the Television show Blue Bloods and The Public Theater’s Julius Caesar at The Delacorte Theater. During the pandemic he started a left wing Socio-political comedy channel called VitaminDeon as a creative outlet that has been growing exponentially since the start of the new year. He’s excited for the pandemic to end so he can get back to auditioning and collaborating! Deonfrank.com

Naiquan Greene, a Brooklyn-bred creative, is an experienced writer/producer/actor who enjoys anime, trying his best to dress like Andre 3000 and making people laugh. He aims to one day become an EGOT, but first he’d like to appear on a Broadway stage where his love of both acting and singing can shine without one upstaging the other.

Luke Kain Broadway: South Pacific. South Pacific First National Tour. Off-Broadway: Runaways. AWAKE. The Room Sings. Judy. Regional: Raisin in the Sun. Film: Saturday Church. Adam. TV: “Dispatches From Elsewhere.” “Two Sentence Horror Stories.” “Law and Order SVU.” Broadway Workshop: Untitled – Lindsay-Abaire/Tesori. A Boy’s Company Presents: “Tell Me If I’m Hurting You” – Jeremy O. Harris. A big thank you to his manager Lisa Calli from Callicompany and his agent Barry Kolker from Carson Kolker. His handle is @lukaraykain on all social media platforms. This is his second project with The Barrow Group and he would like to extend his thanks for the opportunity to celebrate these amazing playwrights.

Eldren Keyes is an actor, music producer, and writer from Wedgefield,SC with a B.A. in Theatre from the University of South Carolina. He’s also an alum of TBG’s Apprenticeship program  and The Billie Holiday Theatre’s Black Arts Institute. Sumter Little Theatre was the beginning of his acting career after he saw Denzel’s performance in Training Day. He’s also been featured in DOA, Yellowman and various short films. http://www.eldrenkeys.com

Jonathan Lipnick (The Buffer, Crown Cork Cafeteria, Til Then, The Working Theater, founding member; The Room Where I Was Held, Martha’s Vineyard Playhouse Fifty Flat, New York Theater Festival; The Writer, Actor’s Studio; Romeo and Juliet, The Taming of the Shrew, The National Players, Comedy of Errors, D.C. Shakespeare Festival; Film/TV; Once Upon a Bookshop, Trophy Boys, The Chosen, Ryan’s Hope, Masada. Jonathan, an ordained rabbi, was a consultant to Paolo Sorrentino for the film This Must Be the Place. He studies acting with Lee Brock and Seth Barrish at TBG. Thank you SDAN!

Vanessa Lynah is a born and raised New Yorker and former TBG student. She is glad to be working with TBG for this celebration of Black Playwrights for Black History Month and that the beauty of these works shines through in this adapted media. Previous works include, (“Crossing to Christmas” by Blaire O’Leary and Alex Kveton), (“Water Water Everywhere”; Exquisite Corpse Co.), (“Bang, Bang, Zoom!”; Varak Baronian) and, (“Buffalo, Buffalo”; Exquisite Corpse Co.).

K. Lorrel Manning is an award-winning writer/director, actor and musician who works in both film and theatre. His critically-acclaimed play AWAKE, which he also directed, received its world premiere at the Barrow Group in January 2019.  He is currently currently shootingLost & Found, a feature-length documentary on young Cameroonian painter Ludovic Nkoth and prepping his second feature film,Sheila & The Punk Rock. Manning has an MFA in Film from Columbia University and a BFA in Drama from the University of Georgia. He currently teaches at both the Barrow Group and Sarah Lawrence College.

Sandra Parris‘ belief in the magic of the stage and its life transforming power has led her to perform in a variety of plays, musicals and operas in the United States and Europe. She is honored to be working with such talented and dedicated directors and cast members.

Eddie Robinson Recent credits include Awake by K. Lorrel Manning at The Barrow Group, Paris by Eboni Booth at the Atlantic Theater Company, God Friended Me(CBS). Eddie is honored and grateful to be a part of sharing these stories by black playwrights and helping to uplift black voices. BLM!

Chrystal Stone hails from Dallas, TX. She has appeared in the award-winning dramatic web series Disciplinary Actions and several independent films including Flawed, Cracks in Limbo and Restricted: An HIV Film. NY credits include: National Black Theatre, New Federal Theatre, The Gallery Players, WOW Café Theater and HERE Arts Center. She also portrayed Coretta Scott King in the Theater Garden’s production The Road to Freedom, Martin Luther King and the Civil Rights Movement. Regional: Shakespeare Festival of St. Louis and The Barnstormers Theatre. As a sports media personality, Chrystal has appeared as a guest commentator on ESPN’s First Take and co-hosted The Hangout on ESPN Radio. She received her B.A. in Theatre from The University of Texas at Austin. www.chrystalstone.com