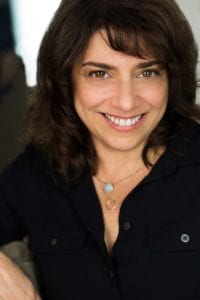 Kate appeared in TBG’s 2017 Mainstage production of Enemy of the People, as well as in TBG’s 2009 workshop of the play. Other TBG productions include Short Stuff 1 and 2, Dream of a Blacklisted Actor, and F.A.B. Women at TBG’s Fast and Furious and According to the Chorus. Other New York theater credits include productions at such theaters as Soho Rep, The Public Theater, Ensemble Studio Theater, The Workshop, The Lambs, and The Jewish Rep. Regionally, she has been seen at The Long Wharf, The Philadelphia Company, and Florida Rep, to name a few. She has appeared in soaps and episodics on TV, and she was featured in the first Miramax film, Playing for Keeps.

In 2005, Kate began teaching ESL. She has been on the ESL faculty at Columbia University, NYU, and Hunter College, where she designed and teaches an acting course for advanced students. She also teaches Creative Writing in Hunter’s English department.

Kate holds an M.A. in English Literature from Columbia University, where she was a President’s and Nicholson Fellow, and an M.F.A. in Creative Writing from Hunter, where she was a Hertog Fellow.