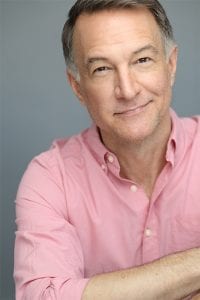 dward has been a member of the Barrow Group community since 2012. He’s worked as an actor and spokesperson in theatre, television, commercials, industrials, voiceover, and print for over twenty-five years. During his ten years in Los Angeles he worked primarily in television, with roles on Modern Family, Hot in Cleveland, The Comeback, and Desperate Housewives, among others. Edward has performed extensively on stage in his hometown of Boston, working with SpeakEasy Stage, Provincetown Rep, Boston Lyric Opera, and the Charles Playhouse, and spent two seasons in nearly twenty productions with the Alabama Shakespeare Festival. Recent credits include Mark Antony in Antony and Cleopatra with the Virginia Shakespeare Festival, Zach in A Chorus Line at the Ivoryton Playhouse, and Duncan in Punchdrunk’s Sleep No More. Edward holds a BFA in Theatre from Adelphi University, where he currently serves on the adjunct theatre faculty. He earned his MFA in Acting from the University of Alabama and has studied with the National Theatre Studio in London.