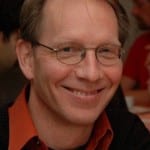 Christopher Wells is an actor and teacher with more than 25 years of professional acting experience including leading roles on Broadway, world premieres by A.R. Gurney and David Ives, a season in British Repertory, commercials, and numerous appearances on such episodic television series as Law and Order and Ed. In 2004 and 2005, Chris taught acting in the Steinhardt School’s program in Vocal Performance at NYU. He began teaching at The Barrow Group in 2003. Before that, he taught tap dancing at AMDA. Chris has trained with Seth Barrish both as an actor and teacher.

After completing a B.A. in Theatre and Music at Amherst College, Chris received further training at the Guildford School of Acting in the UK before being invited to join the resident company at The Redgrave Theatre in Farnham, England, playing such roles as Matt in The Fantasticks and Gratiano in The Merchant of Venice.  He then returned to the U.S. to pursue a professional career in New York. Off-Broadway, Christopher created the role of Jack in the world premiere of Ancient History by David Ives (at Primary Stages) and the role of Philip Glass in Ives’ Philip Glass Buys a Loaf of Bread. He also created a leading role in A.R. Gurney’s The Snow Ball at Hartford Stage Company, the Old Globe and Boston’s Huntington Theatre; and the role of Edward Harrigan in Harrigan ‘n’ Hart (opposite Mark Hamill) at Goodspeed, a production that was subsequently brought to Broadway. Other favorite roles include Sir Andrew Aguecheek in Twelfth Night, Algernon in The Importance of Being Ernest, Molina in Kiss of the Spider Woman, Henry Higgins in Shaw’s Pygmalion, Frank ‘n Furter in The Rocky Horror Show and Professor Harold Hill in The Music Man.

Chris is the very proud father of Malcolm and Roxanne, as well as being a songwriter and performer, member of The Kid’s Band (a children’s music group), and a pretty decent hoofer.