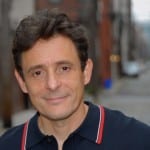 A native New Yorker, Tony attended Queens College in NY, The California Institute of the Arts, and studied privately with William Esper. He’s had the pleasure of being part of the Barrow community since 2011 and has trained there as an actor and teacher under Seth Barrish and Lee Brock.

Work in television includes a lead role in the HBO movie, Path to Paradise, and a recurring lead in Sidney Lumet’s, 100 Centre Street for A&E, as well as guest spots on other network shows. Some film credits include: White Hot, I’m not Rappaport, Tenny Benny, and most recently, the indies: Sweets, and No Letting Go.